Posted by The GoldFish Report at 3:54 PM No comments:

The GoldFish Report No. 446 - Political Theater - Sinking of the DNC Titanic 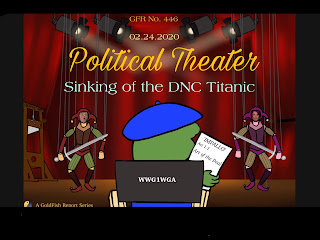 
On The GoldFish Report No. 446 Political Theater w/ The Fetz. Louisa and Jim report on the geopolitical news including FEMA drills in Nebraska, DNC Debate Debacle, VA Assault weapons ban failure, medicare for all plan, Barr-Trump Tweet War, teachers union says active shooter drill traumatizes children and much more. To learn more about Jim Fetzer please visit his blog at jamesfetzer.org and to purchase his books please visit moonrockbooks.com. To receive our Reports you can subscribe to our BITCHUTE Channel at https://www.bitchute.com/profile/qrAL... and to become a Patron of The GoldFish Report you can go to our Patreon page at https://www.patreon.com/user?u=10007100 . You can also subscribe to our "NEW" YouTube channel at, and https://www.youtube.com/channel/UCO-A..., follow us on Twitter at @ReportGoldfish, www.thegoldfishreport.wordpress.com you can also follow us and like us on our 24/7 research news page at www.facebook.com/thegoldfishreport and to help support these and other programs please visit www.thegoldfishreport.com to make a donation. Thank you for your support and Thank you for viewing. Visit our NEW Vimeo on Demand to view our Educational Country Roads Reports at this link here: https://vimeo.com/ondemand/thegoldfis... To View our NEW Educational Bullet Points Reports use this link here: https://vimeo.com/ondemand/174952 For viewer support of The GoldFish Report's Project "The Road to the White House", Please donate at www.thegoldfishreport.com at out PayPal or become a patron at https://www.patreon.com/user?u=10007100. To View The GoldFish Report's POTUS Reports, you can visit our BitChute page or view the unlisted report on YouTube from our POTUS Report page on our website at www.thegoldfishreport.com DISCLAIMER The following videos were created for educational purposes only. The content of this material strictly for research purposes, and readily available to the general public via the Internet. Viewing of the GoldFish Reports acknowledges that senders and recipients hereby agree to this disclaimer, thus releasing the source author from any and all personal liability. Also, individuals who alter or deviate from this source material, may be exposing themselves to the full extent of law. THE OPINIONS AND HYPOTHESES OF OUR GUESTS AND GUEST CO-HOSTS DO NOT NECESSARILY REFLECT THE VIEWS OF THE GOLDFISH REPORT POTUS UPDATE. AN OPINION AND HYPOTHESIS ARE SUBJECT TO CHANGE WITH NEWLY PRESENTED RESEARCH AND EVIDENCE. THE GOLDFISH REPORT POTUS REPORT IS NOT RESPONSIBLE FOR INFORMATION THAT MAY BE UNKNOWINGLY INACCURATE, ALTHOUGH WE DO OUR BEST TO PRESENT FACTS, OUR GOAL IS TO HAVE THE CONVERSATION ABOUT DIFFERENT PERSPECTIVES OF WORLD EVENTS AND HOW THOSE MAKING THE DECISIONS MAY IMPACT OUR LIVES. VIEWER DISCERNMENT IS ADVISED. FAIR USE NOTICE: This site contains copyrighted material the use of which has not always been specifically authorized by the copyright owner. We are making such material available in our efforts to advance understanding of criminal justice, political, human rights, economic, democracy, scientific, and social justice issues, etc. We believe this constitutes a fair use of any such copyrighted material as provided for in section 107 of the US Copyright Law. In accordance with Title 17 U.S.C. Section 107, the material on this site is distributed without profit to those who have expressed a prior interest in receiving the included information for research and educational purposes. Copyright 2020 The GoldFish Report. All rights Reserved.
Posted by The GoldFish Report at 3:40 PM No comments:

Posted by The GoldFish Report at 11:18 AM No comments:

Posted by The GoldFish Report at 7:13 AM No comments: