Was The POTUS Targeted in an Assassination Attempt at the Christmas Tree Lighting Ceremony? 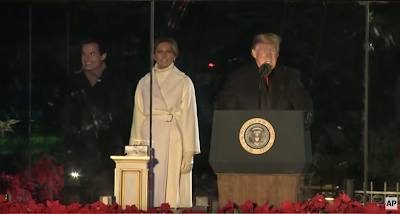 President Trump and first lady Melania Trump participated in the 96th National Christmas Tree Lighting ceremony on the Ellipse outside the White House on Wednesday, with the White House grounds fully decked out for the holidays.
On a stage above the crowds, the President had spectators count down to the tree lighting with him. The tradition draws hundreds of spectators each year, even in frigid conditions. Among this year's ceremony entertainment were musicians 'Dominican Sisters of Mary' and 'Anthony Kearns of The Irish Tenors'.
Interior Secretary Ryan Zinke introduced Mr. Trump as "the man who brought Christmas back to America."


The President expressed his gratitude for the first responders and those serving in the military, among other remarks,  according to the White House Press Secretary's Office. 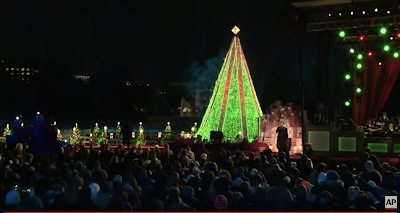 However, some viewers reported seeing unusual looking red laser lights pointed on the president's face and body and immediately suspicion grew as to the origin of the laser lights. 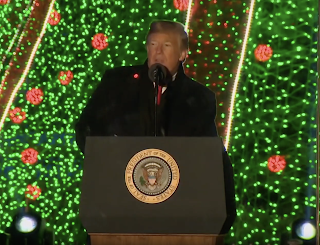 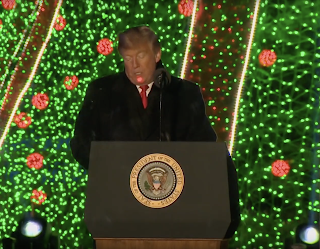 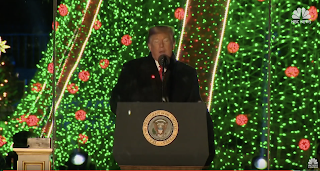 In a Tweet by @POTUS_Schedule, a photo was shared of a protective transparent wall around the President and First Lady described as "Level 10 projectile resistant optical polycarbonate multilayered shielding." 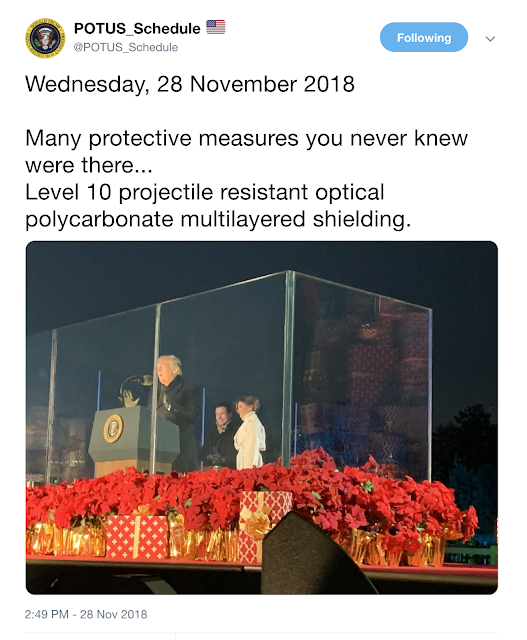 
Pool assumes POTUS arrived at the White House but there is no official confirmation.

At 6:45 p.m. EST, the press pool reported again, that they were unable to confirm POTUS's whereabouts,


Press Pool was not given an explanation for this despite several questions.


At Approximately 6:57 p.m. EST the protective press pool reported they had arrived back at the White House but given no explanation.

According to the President's protective press pool the POTUS leaving them there abruptly was unanticipated and out of the ordinary and that no explanation was offered as to why the POTUS would depart from protocol.

However, a post from the illusive QAnon on the 8Chan board, posted a cryptic message with a photo of a Christmas Tree and underneath was a series of letters and numbers along with the words "We know." signed by 'Q'. The internet was a buzz with rumors of a possible assassination attempt on the President last evening, and cited the above photo's depicting the red laser points on the president's face and body. 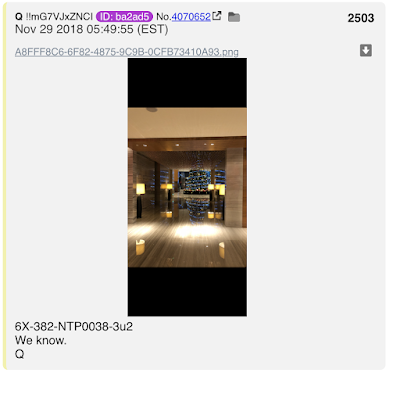 Upon further investigation, The GoldFish Report has learned this cryptic series of letters and numbers corresponds to model number of a Laser Automator manufactured by Surefire Lasers that can be used to deliver Novel 11 Technology according to a retired USAF weapons expert and threat assessment consultant previously worked in Government Black Ops projects, whose name shall remain under protected sources. According to this anonymous source, Novel 11 Technology is well known in the Black OPS programs. The Laser Automator is unlike a rifle in that the laser itself is the weapon and does not require conventional ammunition. Rather, the laser can be used to trigger a heart attack or other conditions in its target  by interrupting the electro-chemical signal in the heart or brain and is often used in the military under direct combat situations.

Whether or not this is the laser point seen on the President in the above photo's remains to be determined, but clearly in combination with the departure from protocol and the cryptic message from QAnon leaves us asking the question,"was there an Assassination attempt on The President of The United States last evening, and if so, by whom? It may be too early to sort out the facts and answer those questions definitively at this time, but suffice it to say, the secret service is well equipped to protect the President whose life they swore to protect and The GoldFish Report will continue to report any news on this story as it develops.

Story by Lou Lee
Posted by The GoldFish Report at 3:50 PM No comments: